A ride in the car … Successive thefts 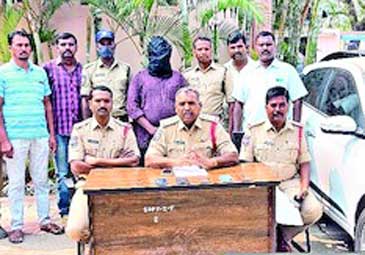 CI Seydou, revealing the details, said that the suspect, who was wearing a mask, was the car that was seized.

Siddipet Town, News Today: Siddipet Towne Police have captured a gang of robbers. One of them was captured and the other three were fleeing. Related details were revealed by OneTown‌ CI Saidu on Thursday. On November 17th last year, Lakshminarasaya Sidibet from Nangunur Village was on his way to work when he was taking a bus at the old bus stop on his way back when unidentified people stole his mobile phone. To this extent the victim complained and SI Rajesh registered a case and began an investigation. The suspects, based on CCTV footage on the old bus, identified the vehicle they were using. Details were later revealed when one of the accused was arrested and questioned.

* Mikala Naresh from Ganganamakud district, Akevedo district, West Godavari district, Nagraj and Mikala Krishna from Akevedo village, another boy (15 years old) and another person (driver) are working as laborers. They are all addicted to sitting and have chosen to make easy money through stealing. The robbers rented a car from a man named Chinamaria in Akevedo and set out to steal cell phones in appropriate areas. On November 17th last year, Lakshminarasaya stole a mobile phone from the pocket of a passenger who was riding a bus at the old bus stop in Sidibet. On the same day, two mobile phones were stolen from the Karimnagar bus stop and later in Bidapale, and two more cell phones were stolen from the bus stop there. The police, who recorded a case of theft in Sidibet, identified the thieves on the basis of CCTV footage and reported the police in the surrounding areas. The next day (November 18), employees stopped five suspects in a car at Renikunta tollgate in Karimnagar and the police were called on suspicion. Rajesh, who came to find out about it, went with the staff and confiscated the car and cell phones.

*On the other hand, the boy and Naresh were on their way to the old bus stop in Sidebet on the 17th of this month, when international intelligence and members of the crime squads spotted them to find out the location of the car after being pressured by its owner. Naresh was taken into custody after confessing to the thefts. The boy was handed over to his relatives and notifications were issued (JCL). CIs Prasad, Narasimha Rao, Task Force, Crime Party and the CCTV Monitoring Unit in cooperation with the staff clarified that the case has been resolved.