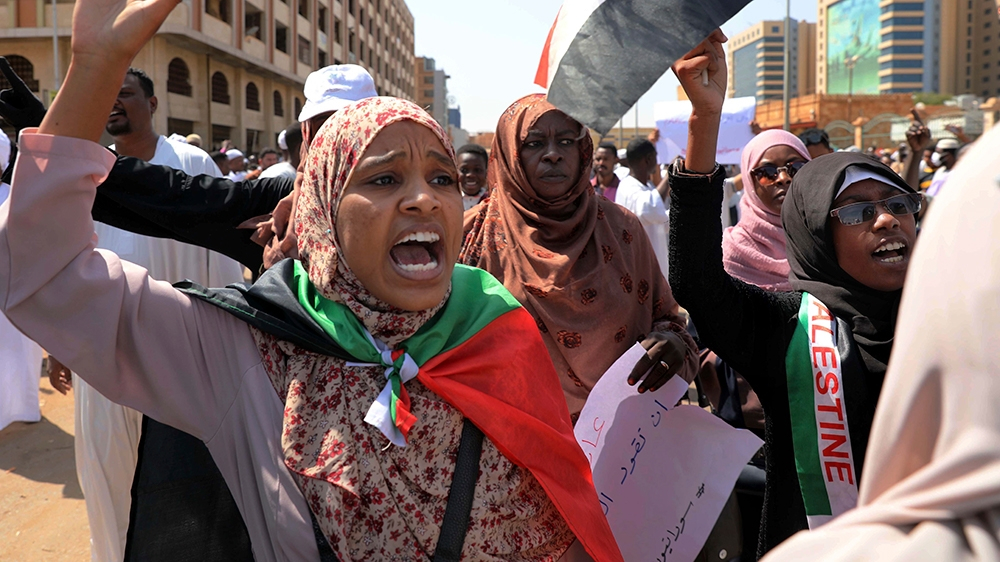 Sudanese political parties rejected the government’s decision to normalize relations with Israel, as officials said they would form an opposition front against the agreement.

Dozens of Sudanese demonstrated in the capital, Khartoum, on Friday, following the joint statement of Israel, Sudan, and the United States, on Friday, in which he said that the two countries had agreed to “end the state of war between their countries.”

A statement issued by the Sudanese People’s Congress Party, the second most prominent component of the Coalition of Freedom and Political Change Forces, said that the Sudanese people are not obligated to accept the normalization agreement.

“We see that our people, who are systematically isolated and marginalized from the secret deals, are not bound by the normalization agreement,” the statement said.

Our people will abide by their historical positions and work through a broad front to resist normalization and maintain our support for the Palestinian people until they obtain all their legitimate rights.

Former Sudanese Prime Minister Sadiq al-Mahdi also criticized the declaration, adding that he withdrew from a religious conference organized by the government on Saturday in Khartoum in protest.

“This statement contradicts Sudanese national law … and contributes to abolishing the peace project in the Middle East and preparing for a flare-up,” said Al-Mahdi, the country’s last democratically elected prime minister and head of the largest political party in the country. New war. “

Kamal Omar, a leader in the Popular Congress Party, said in a separate statement that the Sudanese transitional government is not elected, and therefore is not authorized to normalize relations with Israel.

“This transitional government hijacked the Sudanese position to satisfy regional and international intelligence agencies,” he said.

The demonstrators in Khartoum took to the streets and chanted, “There is no peace, no negotiation, no reconciliation with the occupied entity,” and “We will not surrender, but we will always stand with Palestine.”

He indicated that there are a number of parties within the Forces of Freedom and Change that have warned the transitional government that it will withdraw its support if it is agreed on normalization with Israel.

Normalization with Israel is a rejected step. He said that the government is not authorized to make such a decision with a racist state that practices religious discrimination.

“The government made a big mistake, and it is a step that will not achieve economic abundance,” Wadia told Al-Jazeera.

The reaction of Palestinian officials was sad as Sudan became the third country to normalize relations recently, after the United Arab Emirates and Bahrain.

Palestinian Authority President Mahmoud Abbas condemned the agreement and said that the only way to achieve peace is to resort to international law to get Israel to end its occupation of the Palestinian lands.

However, according to Ibrahim’s call from Al-Jazeera, many Palestinians believe the Palestinian Authority has little to offer other than condemnation.

A spokeswoman from the occupied West Bank city of Ramallah said: “For many political analysts here, the Palestinians stand facing the wall and really don’t have much to hope for, unlike Trump, he will not get a second term in office.” .

See also  The digital agenda: The European Union and the USA want to take stronger action against hacker attacks

“Many Palestinians on social media say that the hearts of the Sudanese people are with the Palestinian people, but their military rulers have dragged it.”

On Saturday, the Iranian Foreign Ministry criticized the Sudanese move, saying: “Pay a sufficient ransom, and close your eyes to crimes against the Palestinians, then you will be removed from the alleged blacklist of terrorism.”

The list is clearly as bogus as the US war on terror. Shameful! ”He added.