Today in the New York Times 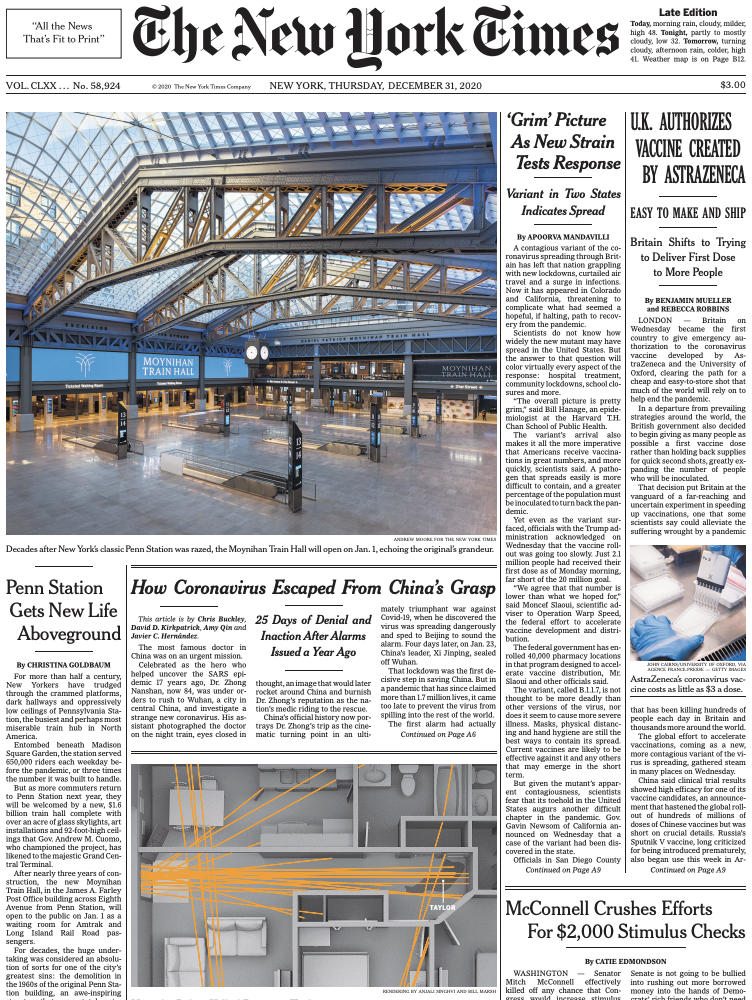 Bad prediction of a new variable that tests answers. The new infectious variant appeared in Colorado and California, threatening to complicate what appeared to be the correct path to recovery. Scientists don’t know how the variable got to the United States, but it will affect everything: treatments in hospitals, closures of communities and schools, and it makes it all the more important to speed up the distribution of the vaccine, which is going much slower than expected: They have been vaccinated. Just over 2 million people, versus the twenty assumed.

– England licenses the vaccine, made by Astrazeneca. Easy to make and ship. England became the first country to ratify the new vaccine on Wednesday, paving the way for an inexpensive and easy-to-store vaccine. The government also decided to give the first dose to the largest possible number of people, without allocating the necessary quantities for the second dose at the present time.

– How the Coronavirus Survived the Takeover of China. 25 days of denial and inaction after sounding the alarm a year ago. The lockdown of Wuhan, where the coronavirus was discovered, was the first critical step for China, but with 1.7 million already dead, it is too late to stop the virus from spreading around the world. The first warning was issued 25 days ago, that is, exactly a year ago, but the political authorities did not listen to the scientists and tried to hide the seriousness of the virus and its extent.

– McConnell obstructs efforts to raise the stimulus allowance to 2,000. c.The Senate, Trump’s most slave servant so far, has ruled out the possibility of the law continuing like this unless you add two other legislative measures that Democrats are totally opposed: an investigation into election integrity and the removal of legal protections on digital platforms.

– Penn Station (New York main train station) I am looking for a new life. C.Large image, nearly full page, with the following caption: After decades of demolishing the classic Bin station to the ground, the new station opened on January 1st, just as fine as the original station.

– Argentina legalizes abortion, which is a landmark in an extremely conservative region. Argentina became the largest country in Latin America to legalize abortion on Wednesday, after a long and tense debate in the Senate that exposed tensions between a community long influenced by the Catholic Church and a generation mainly driven by feminist movements.

– Do not hurry In arctic craters. With the deadline approaching and little interest from oil companies, Alaska may decide to buy the licenses.

– 20 killed at an airport in Yemen. The bombings began before the arrival of a plane carrying several members of the new government that had hoped to end the civil war.

– Israel salutes its spy. Jonathan Pollard, who provided Israel with American documents for 30 years, was welcomed in Jerusalem.

– No more “business as usual”. A retrospective photographic exhibition showing how the epidemic has changed the business world and devastated the 2020 economy.