The second wave of the virus, the rate of infection slowed 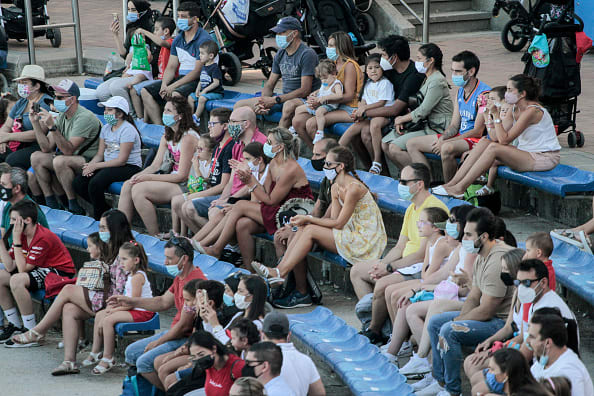 Visitors watch a dolphin show while they keep a single seat as a safety distance at Madrid Zoo on August 25, 2020, in Madrid, Spain.

There is cause for cautious optimism in some European countries grappling with the second wave of the coronavirus pandemic, as the rate of daily new infections begins to stabilize.

Meanwhile, a report published on Thursday raised hopes that the country would regain control of the recent spike in coronavirus cases. Imperial College London in the United Kingdom published the latest results from an ongoing study on the spread of the virus in which it said that the number of Coronavirus (or R) replications “decreased from 1.7 to 1.1 … but with a wide potential range, the latter value from 0.7 to 1.5”.

The number R indicates the number of secondary infections caused by an infected individual, on average. Scientists want to keep the R number less than 1 to slow the spread of the disease.

In a report on the results of swab tests conducted on more than 80,000 people from September 11, imperial scientists said: “This indicates that the rate of new infections has decreased, but if the case is higher than 1 it will mean that cases will continue to rise if Current trends continue. ” 18 and 26 as part of her “REACT 1” study.

The study tracks current cases of Covid-19 in the community by testing more than 150,000 randomly assigned people every month over a two-week period. Volunteers take nose and throat swabs at home, which are then analyzed in the laboratory.

Professor Paul Elliott, director of the REACT program at Imperial, said the results indicate that some measures introduced in the UK to stop the spread of the virus, including a “rule of six” limiting social gatherings, may have an effect.

He said: “While our latest findings show some early evidence that the growth of new cases may have slowed, indicating that efforts to control infection are working, the spread of infection is the highest we have recorded so far.”

This reinforces the need to take preventive measures to limit the spread of the disease and the public’s commitment to it.

In addition to the United Kingdom, other European countries have tightened Coronavirus measures to stop the spread of the virus, with measures including re-introducing local closures in some regions and cities and limiting the number of people who can socialize, as well as the working hours of bars, bars and restaurants.

Germany and Spain announced tougher regional measures this week to curb the rise in coronavirus cases, especially in urban areas, as the disease spreads to family gatherings.

The major European countries that have seen significant spikes are also seeing what could be signs that the daily number of infections, while still high, is temporarily starting to stabilize and decline, in some cases – but not all.

In Spain, daily infection numbers remain high, hovering around the 10,000 mark this week with around 11,000 recorded on Wednesday, but a temporary drop in new cases has been observed. Spanish Ministry of Health The data indicates a decrease.

Between 14 and 20 September, more than 70,000 new cases were reported while the following week’s data saw just over 53,000 new cases recorded. However, the government is not taking any opportunity with Madrid, the epicenter of the spread of the virus, as it decided on Wednesday to close the capital as infections are still high. Regional data indicate that it accounts for more than a third of the daily new infections across the country. Spain has the highest number of cases in Europe, with 769,188 cases, according to Johns Hopkins University.

In France, which has the second largest number of coronavirus cases (with 604,031 cases, according to JHU), the situation is not good. More than 12,000 new cases were reported by the Health Ministry on Wednesday, with more than 10,000 new cases increasing for the first time in three days, and the number of people in hospital rose by 90 to the highest level in 10 weeks, according to Reuters estimates, from 6,590.

Italy and Germany are two of the major economies in Europe that have not experienced such a big boom as anywhere else, although both have seen severe outbreaks in certain regions.

Germany reported 1,798 new cases on Wednesday, down from 2,089 new infections the day before, according to data from the Robert Koch Institute, but the Public Health Authority has warned that it has a four-day R value (a four-day moving average number of new cases). It was mostly greater than 1 since the second week of September “although it settled at 0.96 on Wednesday.

See also  Coronavirus, the latest news from Italy and the world on Covid- Corriere.it

In Italy, it appears that the number of new daily infections does not increase significantly. Although 1,851 new cases were reported on Wednesday by the Ministry of Health, slightly higher than 200 cases from the previous day, the Italian news agency ANSA noticed that the Ministry of Health had conducted 15,000 more coronavirus tests than the previous day, and this could account for the increase.

Describing the incidence curve as “stable”, ANSA indicated that no region has shown any new infections and that “Campania, once again, topped the road with 287 new cases,” followed by Lazio, where Rome is located, recording 210 new cases. And Lombardy, where the original outbreak of Italy had appeared, 201 more cases the day before.