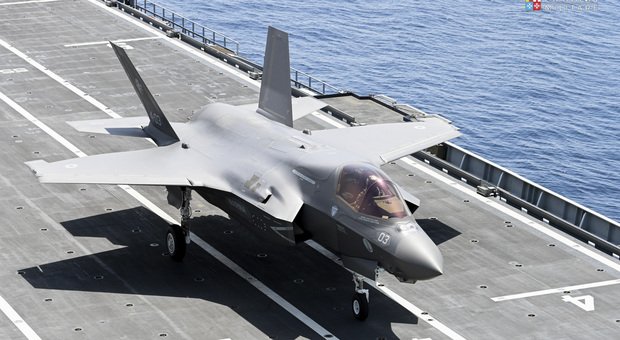 The first fighter on board the aircraft carrier Cavour was delivered to the Navy today, which this year in the United States received certification for work with fifth-generation aircraft. A Navy F-35B aircraft docked for the first time in Taranto, after a test and certification activity conducted with US aircraft during the “Ready for Operations” campaign that concluded at the end of April this year. This is the third aircraft for the Navy that has just been pulled from the assembly plant in Camiri, while the previous two were in the United States to support the training of armed forces pilots.

“Today we witness the assembly of the Navy’s first F-35 aircraft carrier Cavour: a major step towards the strategic goal of providing Defense and Italy with an aircraft carrier capability of the latest generation of aircraft on board. A capability that places us in the elite of a few countries in the world, thus raising Italy’s international level and weight,” announced the Chief of Staff of the Navy, Giuseppe Cavo Dragon.

The arrival of the aircraft marks a milestone in the AV-8B Plus Harrier replacement process. The Navy expects to have initial operational capability by 2024, and therefore final operational capability after the last aircraft are delivered to the Navy. Arrival on board allows pilots to begin training with a so-called “Bravo Advantage”, i.e. qualification for assembly and take-off from the flight decks of sea-going ships, which in the case of fixed-wing aircraft serving as aircraft carriers, is called carrier qualification.