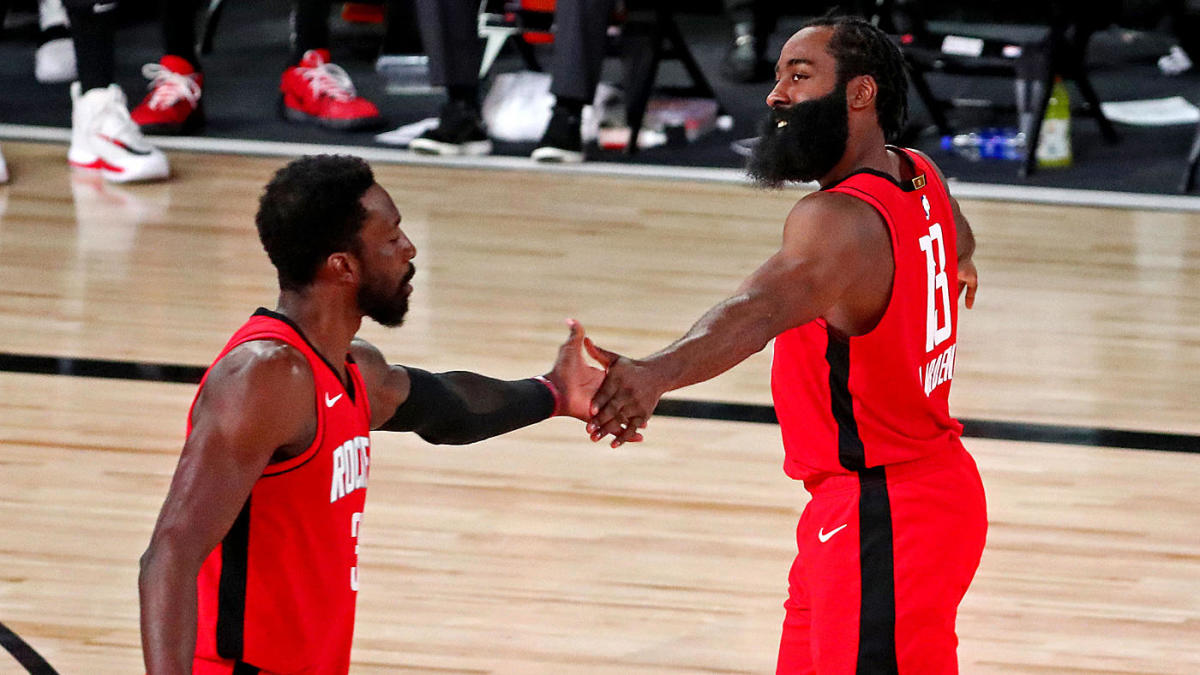 With Russell Westbrook out, the Houston Rockets were supposed to turn into the James Harden show. Instead, they lead their first-round series 2-0 against the Oklahoma City Thunder because of everybody except Harden. Houston’s former MVP shot 5 of 16 for a pedestrian (by his standards) 21 points. It didn’t matter. Houston won 111-98 over Oklahoma City. Seven Rockets hit double figures in what was an amazingly balanced attack.

The Thunder now have their backs against the wall, but if they can take anything away from this game, it’s that they’re onto something with Lu Dort. The rookie, who missed Game 1, took the Harden assignment himself and absolutely flummoxed the NBA’s leading scorer. The Thunder need to go back to the drawing board offensively, but if they can continue to contain Harden like this, they’ll be able to make this a series. Here are the major takeaways from Houston’s win.

Here are the three most important takeaways from tonight’s Rockets victory.

1. The Rockets are disproving everything we thought we knew about them

The assumption entering the postseason was that Houston wins were, broadly, going to rely on three things:

Well, James Harden was held completely in check in this game. His 5-of-16 shooting line doesn’t do justice to his struggles. Three of those shots came in garbage time. While Houston did hit 19 3-pointers, they shot only 33.9 percent behind the arc, worse than Oklahoma City in Game 2. They were dead even in fouls and took one fewer free-throw.

And it didn’t matter. The Rockets won. They won despite their two lead-ball handlers shooting 11-of-36 from the field and 2-of-21 on 3’s. But they seven total Rockets reached double figures, and they held Oklahoma City to only 98 points behind their switching defense. Size remains a weakness, but defenses that deflect and strip as often as Houston does will always be problematic for ball-handlers. The Thunder lean on three point guards and even they’re having issues with Houston.

Harden isn’t going to struggle every night. Russell Westbrook will be back soon. They’ll usually hit a higher percentage of their 3’s. We knew all of that already. What we didn’t know was whether or not they could win when those things weren’t working in their favor. But today was proof. The Rockets can win even when the game isn’t played on their terms. They don’t need to draw 40 free-throws or get 50 points from Harden. This is a championship-caliber team.

2. We’re watching a Defensive Player of the Year candidate blossom before our very eyes

James Harden, former MVP, maybe the greatest one-on-one scorer in NBA history, shot 2-of-13 from the field for the first 42 or so minutes of this game. He padded his stats a bit in the final minutes, hitting his final three shots, but that came only after the Thunder removed rookie Lu Dort to boost their offense. Dort locked Harden down for the vast majority of this game, and he did it, essentially, by himself.

This was Dort’s first playoff game. He stared down maybe the best offensive player on Earth and completely locked him down. That should surprise nobody that has watched Dort all season, but the list of rookies that have done anything like this in the postseason is extremely short. Dort is going to be one of the very best defenders in basketball for years to come. Today was his coming out party.

Something awfully familiar happened in the late stages of this game. Houston, trailing a Chris Paul-led team, went on a furious run with James Harden on the bench led by a non-shooter. Jeff Green isn’t quite as clunky as Josh Smith, but he led Houston’s run in a very different way. Yes, he made 3-pointers, but more importantly, Houston allowed him to function essentially as a point guard.

Houston trailed by three when Harden left the game in the third quarter. They led by 11 when he returned. This isn’t likely to be Green’s permanent role. Westbrook will eventually return, but it’s a nice trick to have in your back pocket. Green’s ball-handling for his size has always been a strength, but it’s never been weaponized in quite this way.