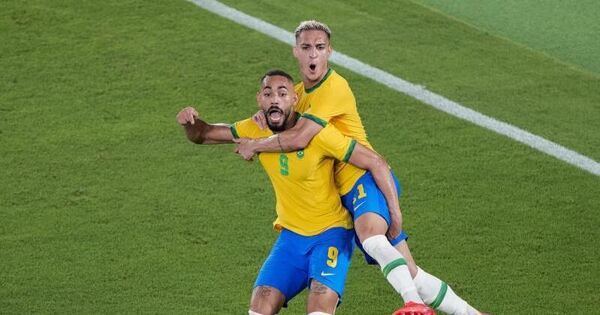 Yokohama (dpa) – Brazilian Olympic footballers jumped over the grass and celebrated a renewed golden victory with large national flags draped over their shoulders.

Thanks to Joker Malcolm, the South Americans have once again crowned themselves Olympic champions. Andre Jardin’s team beat Spain 2-1 (1-1, 1-0) after extra time in an exciting match. Substitute Malcom from Zenit St Petersburg scored the crucial and vital goal for the Brazilians in the 108th minute.

Back in 2016, fans in this football-mad country were able to look forward to the title at the Summer Games – at that time, Brazil won the final against Germany. On Saturday, Matthews Cunha put the winner in front for the first time in the second minute of stoppage time in the first half. Thanks to Mikel Oyarzabal, only Spain managed to equalize in the meantime (61st place).

At the Yokohama International Stadium, where Germany lost the World Cup final to Brazil in 2002, the match was still in control at first. Inaccuracies, technical errors, and errors initially shaped the procedure. There were no successful combinations.

The Spaniards had their first chance to score after a quarter of an hour. Oyarzabal headed from the goal area with six yards, but Diego Carlos saved and barely stopped an own goal. For Brazil, Richarlison hit the outside nets from an acute angle (25).

Little came out of the game, but Brazil still had a great opportunity to take the lead: Spain goalkeeper Unai Simon brought down Herta BSC Kona, and referee Chris Peth of Australia decided the penalty based on video images. However, Olympic top scorer Richarlison shot from over the gate (38).

It was performing being better before the break. Captain Dani Alves kept the ball strong after Claudinho’s cross. Almost at the penalty kick, Cunha was more attentive than three Spanish players, brilliantly winning and finishing in the net at the right corner.

After changing sides, things continued quickly. First, Oyarzabal missed a good chance to equalize when fellow substitute Carlos Soler shot in front of the Brazilian goal. Then the two played perfectly together: Soler sent a cross to Oyarzabal and the striker scored a fine goal to equalize. Shortly before that, Simon had cleared the handicap against the self-contained Richarlison.

In the latter stages of original time, Spain was closer to victory than its rivals. The ball fell twice on the Brazilian goal post. Brazil was fortunate to have the extra time. In it, Malcolm decided the game.

Information about the game Brazil – Spain

Information about sports at the Olympics (English)

Information about the German national team at the Olympics