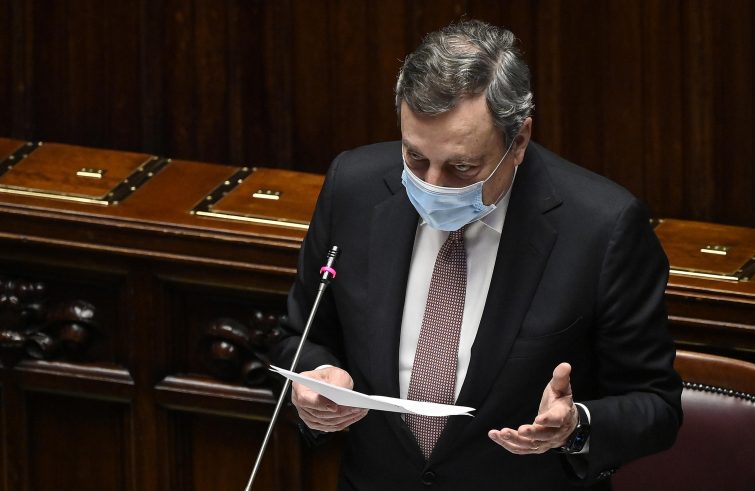 In his first question in the House (the prime minister’s last question, dated last October), Mario Draghi followed up on a series of “immediate response questions” posed by MPs from various groups on the major issues at the center of the public debate.

Mitigate pandemic control measures with a gradual and standardized approach to the epidemiological trend; Affirmation and re-launch of a “balanced, efficient and humane” immigration policy because “no one should be left alone in Italian territorial waters”; Strengthening safety controls in the workplace, as well as recruiting new specialized employees; More interventions to support the economy with the next decision next week, with special attention to the tourism sector and celebrations; Share US policy on vaccine patents, but start removing US and UK export bans. In his first question in the House (the prime minister’s last question, dated last October), Mario Draghi followed up on a series of “immediate response questions” posed by MPs from various groups on the major issues at the center of the public debate. . Let’s see some important passages from the Prime Minister’s answers in the room.

Reopen and support the economy. “The topic of the ceremonial sector will be of interest to the next Palazzo Chigi control room, which will be held on Monday 17 May … We must be careful to strike a balance between the causes of the economy and the causes of health … As in other cases, the government intends to adopt a step-by-step approach And easing restrictions depending on the epidemiological trend and the vaccination campaign … More compensation measures are expected in the new “Sostegni Decree” next week … I agree that tourism is the right of a sector of great importance to our country; the epidemic has had tremendous economic impacts on operators, and we are working To allow them to start over as soon as possible and with the utmost safety.

In this sense, the first initiative to support tourism is the effort by the government, in the personality of the Extraordinary Commissioner, to move forward rapidly in completing the vaccination campaign. According to the commissioner’s calendar, between the end of June and the beginning of July, we will vaccinate, with at least one dose, the vulnerable and those over 60, who are the most vulnerable. Vaccination actually leads to a decrease in infection. ”

Work security. The National Recovery and Resilience Plan “establishes a specific line of reform specifically to combat undeclared work and strengthen supervisory activities. A national action strategy is envisaged to strengthen the National Labor Inspectorate, as a national agency for labor supervision, and to increase its structural controls. Under the current legislation, it is envisaged that 1,000 more people could be employed in the labor inspectorate, compared to 4,500 employees currently in service, and this should be added to these other assumptions that can be made with the resources allocated soon in a future legislative measure.

Immigration. “The Italian government is committed to promoting appropriate bilateral initiatives and taking action on the part of the European Union, so that the Libyan authorities oppose the smuggling of weapons and people, respect human rights and exert pressure within Europe, so that we return to a reliable and effective redistribution of migrants arriving in Italy.” In my conversations with the Prime Minister Al-Libi, Dabaiba, has particularly insisted on the need to ensure the restoration of security conditions in the region as an integral part of the stabilization process in the country and the entire Mediterranean region.

Faced with this complex and dramatic reality, the government’s immigration policy wants, as I had the opportunity to stress on another occasion, to be balanced, efficient and humane.

No one should be left alone in Italian territorial waters. We consider respect for human rights an essential component of any immigration policy. The priority, in the short term, is to contain the migration pressure in the summer months … Our goal is to immediately activate a temporary emergency mechanism to resettle migrants rescued in search and rescue operations, based on the same principles of participation and solidarity with the Malta Agreement. “

European Budget Rules. It is understood that the deactivation of the protection clause must continue until the European economy regains pre-crisis levels, as expected in 2023, also in the future “There is no doubt that the rules have to change … The current situation The budget rules are insufficient. Sufficient, and even more ill-suited to an economy emerging from a pandemic. In the coming years, we will have to focus above all on a robust revival of economic growth, which is also the best way to ensure fiscal sustainability. Therefore, a review of the rules must ensure greater margins of action for fiscal policy In its function of stabilizing countercyclical. In particular, we must stimulate investments, especially to promote digital and environmental transformation. At the same time, the new rules must also aim to reduce the growing differences between the economies of member states and complete the European institutional architecture.

Vaccines and patents. There is an imbalance between the position of the major pharmaceutical companies, which have received massive government support, and that of the poorest countries in the world, which either do not have access to vaccines or do not have the money to buy vaccines. Therefore, the direction this announcement is going from the US should be shared in my opinion. There is clearly a risk that must be avoided, and that the patent pending is a disincentive to research and production of other vaccines. As I said, temporary, limited and well-defined suspension – as experts in the sector have told me – should not be a disincentive, but I would also like to point out how complex the situation is …

Before reaching vaccine liberalization, simpler steps are necessary: ​​first and foremost, remove the massive export embargo that countries like the US and UK continue to maintain.

Then production must be increased, through technology transfer and identification of new sites, a process which is already underway in Italy, but it will be necessary to start locating new sites also in poor countries.