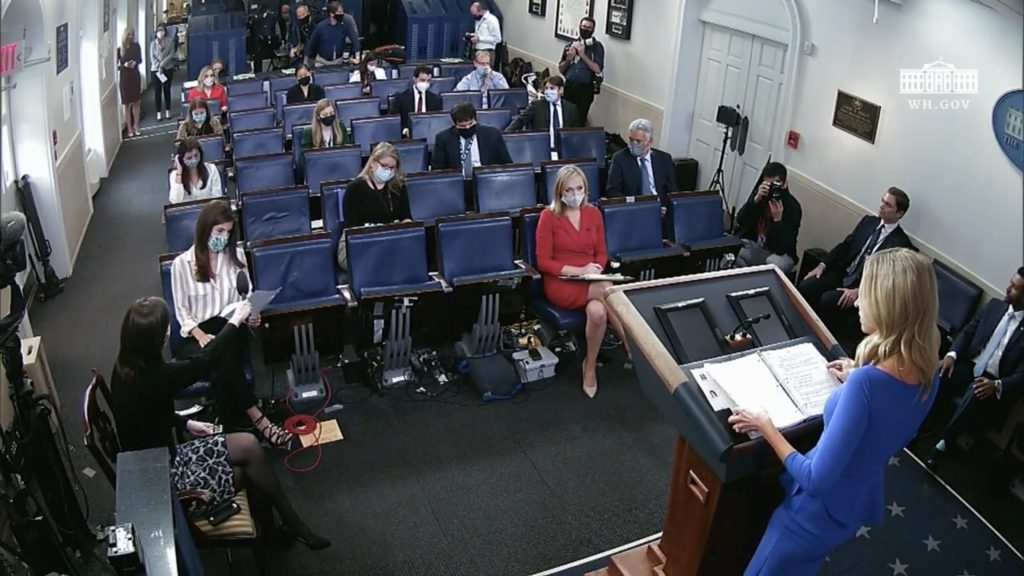 White House Press Secretary Kylie McCannani conducted a Usually rowdy briefing Thursday – She and Fox News correspondent John Roberts, for example, walked in on why President Trump had not condemned white supremacists during Tuesday’s debate. Incorrectly claimed that Amy Connie Barrett was a Rhodes Scholar (Barrett went to Rhodes College in Tennessee). She blamed “the media” for: 1) The Times did not cover Trump she has Denounce the white fanatics; 2) Boycott her while making a big deal over Trump’s boycott of Joe Biden; 3) Talk about Proud Boyz.

As usual, McNani and other White House staffers were revealed during the briefing. (Trump White House staff)They generally do not wear masks out of respect for the president’s contempt for them,” The The New York Times Reports.) The Brady media room is a small space, and while most reporters were masked – although not Jane Pellegrino from OANN – and spread out as far as they could manage it, it’s the kind of environment that The World Health Organization has expressed its concern about This summer in terms of transmission.

The Washingtonian contacted several news organizations to inquire about the safety of their reporters. a Washington Post The spokesperson says the News Foundation is “working to identify Post journalists who may have been in contact with White House officials recently, to ensure our colleagues are tested quickly and fully supported.” Speaking on Fox News Friday, Roberts said that anyone who plays billiards duty for Trump is undergoing testing, and that the president has been keen on it. Keep his distance From the correspondents.

READ  From the Qing Empire to the People’s Republic, China has been concerned about separatism

The White House Correspondents Association does not yet have a statement about the safety of its members in the briefing room in light of the president’s diagnosis. Last Tuesday, its board of directors sent a memo to members advising how to keep themselves and their colleagues safe as Election Day approaches, and many White House reporters should travel further. She advised journalists traveling on Air Force One to “take notice” of the District of Columbia Self-monitoring requirement After traveling to high-risk areas.

The organization says it “has repeatedly and strongly advocated for our members to take precautionary measures when traveling on a mission with the president” and has heard from members who have expressed “concerns about individual events or travel on a larger scale and have tried to work with the White House and campaign to address as many of them as possible.” But she wrote, “Realistically, it is stupid to assume that the situation will improve dramatically over the next six weeks.”