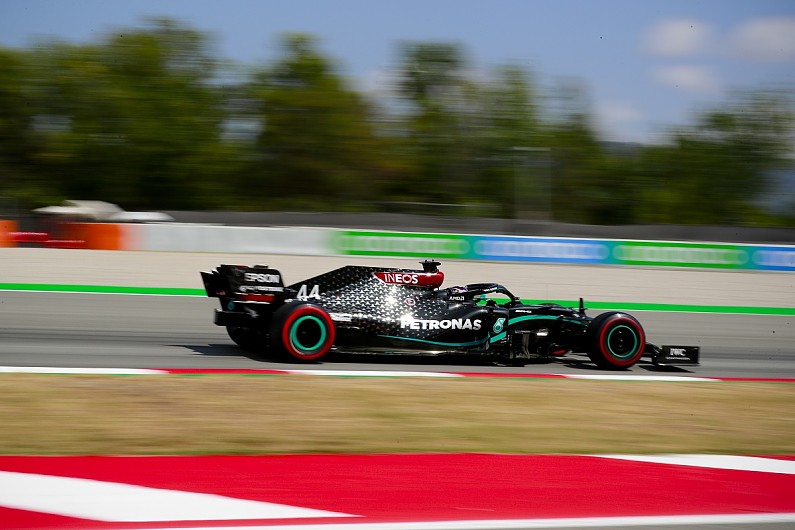 All the drivers in the top 10 made it through to Q3 on the soft tyres, so there will be no contra-strategy attempts at the start of Sunday’s race.

Hamilton led the way after the first runs in Q3 with a 1m15.584s, which put him 0.059 seconds clear of his team-mate, despite only setting the fastest time in the third sector.

Bottas ran ahead on the final runs and although he did manage to edge Hamilton in the first sector and establish a new best second sector, he faded in the final part of the lap and could not improve.

Hamilton also did not go faster on his final run, but his pole was already secure.

Verstappen edged Sergio Perez for third, as he too failed to improve on his final run, with Perez setting a personal best but still being unable to get ahead of the Red Bull.

Lance Stroll was fifth ahead of Alex Albon in the other Red Bull, with Carlos Sainz Jr leading Lando Norris, who only made into Q3 by 0.002s, in seventh and eighth for McLaren.

Charles Leclerc was the lead Ferrari but ended up down in ninth, with Pierre Gasly making into in Q3 for the fourth time this season and then rounding out the top 10 on the grid.

Gasly’s late improvement at the very end of Q2 knocked out Sebastian Vettel, and he will start 11th for the second race in a row – the third time this season he has not made it into the final part of qualifying.

Daniil Kvyat, who will face a post-qualifying investigation for an incident with Kevin Magnussen at the second corner in Q1, took 12th ahead of Daniel Ricciardo.

Kimi Raikkonen scored his best qualifying result so far in 2020 with 14th, as Esteban Ocon finished as the slowest driver in Q2.

Ocon improved with his final run – all drivers that went for a second effort (which did not include the Mercedes pair and Verstappen) set personal bests apart from Sainz and Leclerc – but it was not enough.

Ahead of qualifying, the stewards decided to impose no penalty after investigating Ocon’s bizarre crash at the end of FP3 as he caught up to the rear of Magnussen’s Haas exiting the long right of Turn 3.

The stewards found neither driver was significantly to blame and called it an “unfortunate” accident.

In Q1, Raikkonen made it out of the first part of qualifying for the first time this season as the two Haas cars could not improve enough to stop the Alfa Romeo’s progress, despite him setting his final flying lap early in the pack of cars attempting a last blast in the first segment.

Magnussen managed to out-qualify Romain Grosjean despite being behind in all three practice sessions – with Grosjean sixth and fifth in FP1 and FP2 respectively – but his final lap improvement left him 16th and out.

George Russell did not make it into Q2 for the first time since the season opener, but he maintained his 100% qualifying record over Nicholas Latifi and Williams.

Antonio Giovinazzi finished last in Q1, almost a second slower than his team-mate with his best time, after earlier running heavily over the kerb at the exit of the final corner on his penultimate flying effort.

See also  Doping: Doping: the first indictment in the United States based on the "Rodchenkov Act"