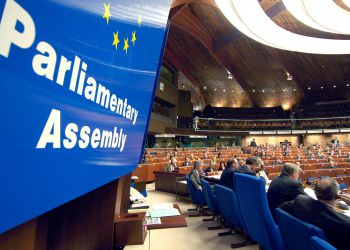 Today, the European Parliament adopted a resolution supporting the European Union’s system of global sanctions on human rights, while calling for the inclusion of corruption as a punishable crime.
The approved resolution says corruption has a devastating impact on the human rights situation, often undermining the functioning and legitimacy of institutions and the rule of law.
But unlike similar systems, such as the US Magnitsky Act, the European Union’s current Global Human Rights Sanctions System (GHRSR), adopted in December 2020, does not include corruption related to human rights abuses as a punishable offense with restrictive measures. Parliament therefore urges the European Commission to introduce a legislative proposal that would expand the scope of the GHRSR to cover this crime.
MEPs must also be able to raise cases of gross human rights violations in order to increase the legitimacy of the sanctions regime. Furthermore, MEPs insist on an inclusive process to facilitate the contribution of civil society to reporting violations. It also calls for the European Parliament to introduce a qualified majority vote in the Council, even when sanctions are adopted under the GHRSR.

Counter-sanctions are intended to dissuade the EU from defending human rights.
Furthermore, MEPs condemn any counter-sanctions imposed on the EU and its institutions, deputies, bodies or citizens, simply for defending human rights, democracy and the rule of law through the GHRSR.
They stressed that the EU’s response to such retaliatory measures by third countries must be swift and coordinated, adding that bilateral agreements with these countries should not undermine the EU’s sanctions regime and its credibility in foreign policy in general.
The text was adopted by 584 votes to 73, with 33 abstentions.

READ  Hot Arctic, the complex partnership between China and Russia

The European Union’s global human rights sanctions regime offers a direct and tangible tool to respond to gross human rights violations and demand accountability for those responsible. It should become a core component of the EU’s broader human rights strategy and a key part of our foreign policy toolkit. I welcome the rapid implementation of the new instrument and hope that it will support the objectives of the EU’s Common Foreign and Security Policy,” said David McAllister (EPP, DE), Chair of the Foreign Affairs Committee.
“By allowing us to target individuals and entities responsible for gross human rights violations wherever these violations occur, the EU’s comprehensive human rights sanctions regime reinforces the EU’s leading role in respecting human rights. Subcommittee Chair Maria Arena (S&D, BE), said the system needs Also to target the economic and financial defenders of those who violate human rights, the European Parliament and civil society need to be closely involved to increase its legitimacy on human rights.

* Head of the Media Department of the European Parliament in Italy.