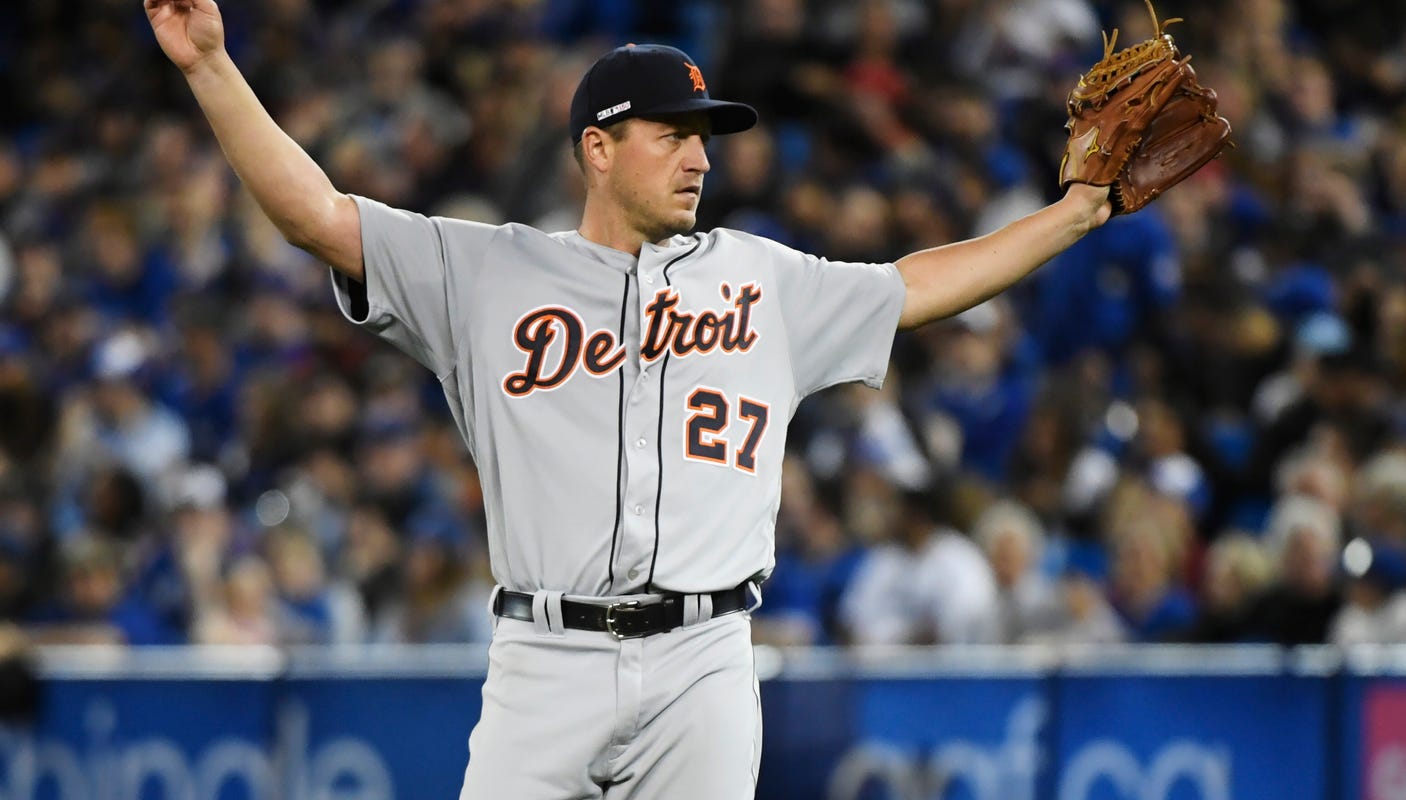 Whether the Detroit Tigers get off to a hot start or maintain their losing ways in this year’s abbreviated 60-game 2020 season, we know one thing: Tigers fans won’t have Jordan Zimmermann to kick around anymore, at least for the first six weeks of the season.

Zimmermann was placed on the 45-day injured list Saturday, making him ineligible to pitch until at least September. The move means that the 34-year-old, who was entering the final year of a five-year, $110 million contract signed before the 2016 season, may have already thrown his final pitch wearing the Old English D. By the time he’s available again, the Tigers will likely be looking toward their 2021 rotation in handing out innings. 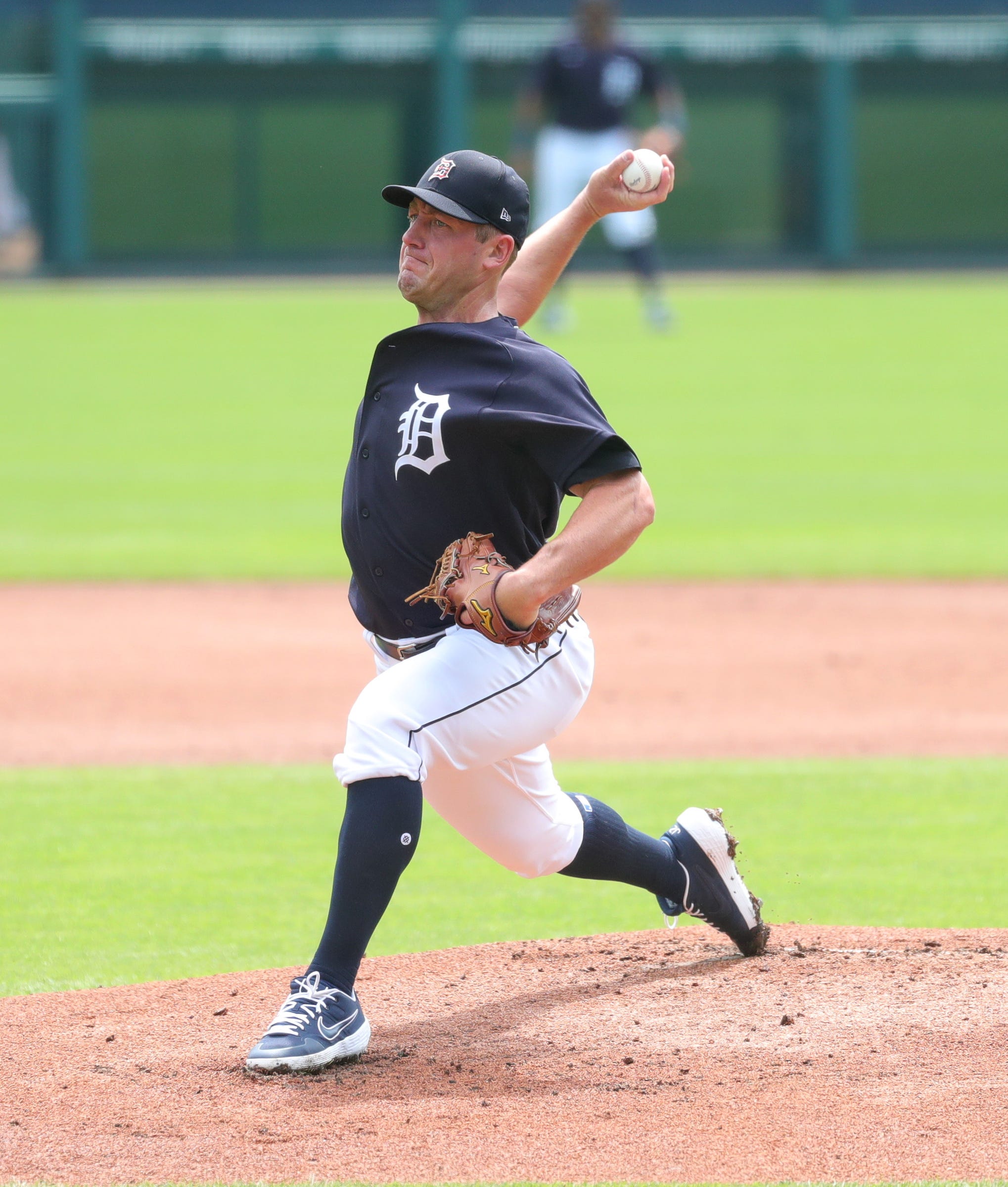 Looking to 2020: Here’s what it will take for Detroit Tigers to make noise

In the Free Press bookstore: ‘Mr. Tiger: The Legend of Al Kaline, Detroit’s Own’

That $22 million-per-year salary made Zimmermann a big target for fans, especially as the Tigers piled up losses and Zimmermann piled up injuries. Even this season, with his prorated payout sitting just above $8 million, it’s fair to say he was pitching with a countdown clock until the Tigers were free of his contract, arguably the worst for a pitcher in franchise history.

But let’s not dwell on the bad times, though there were many. Yes, Zimmermann had multiple gems among his 95 starts in Detroit, so let’s go digging for those instead, as an omen of the good times potentially arriving with one possible replacement for Zimmermann in the rotation — Casey Mize.

[Get fresh Tigers news and analysis every Monday morning with the free Tigers Headlines Newsletter!]

Zimmermann drew the start for the 2016 home opener — Justin Verlander (remember him?) started Opening Day on the road in Miami — against the Yankees and delivered, allowing two hits and walking three over seven innings as the Tigers shut out the Yanks. Zimmermann’s next two starts, against the Pirates and (defending World Series champion) Royals were equally successful, adding another 12 1/3 innings of scoreless ball to his total. 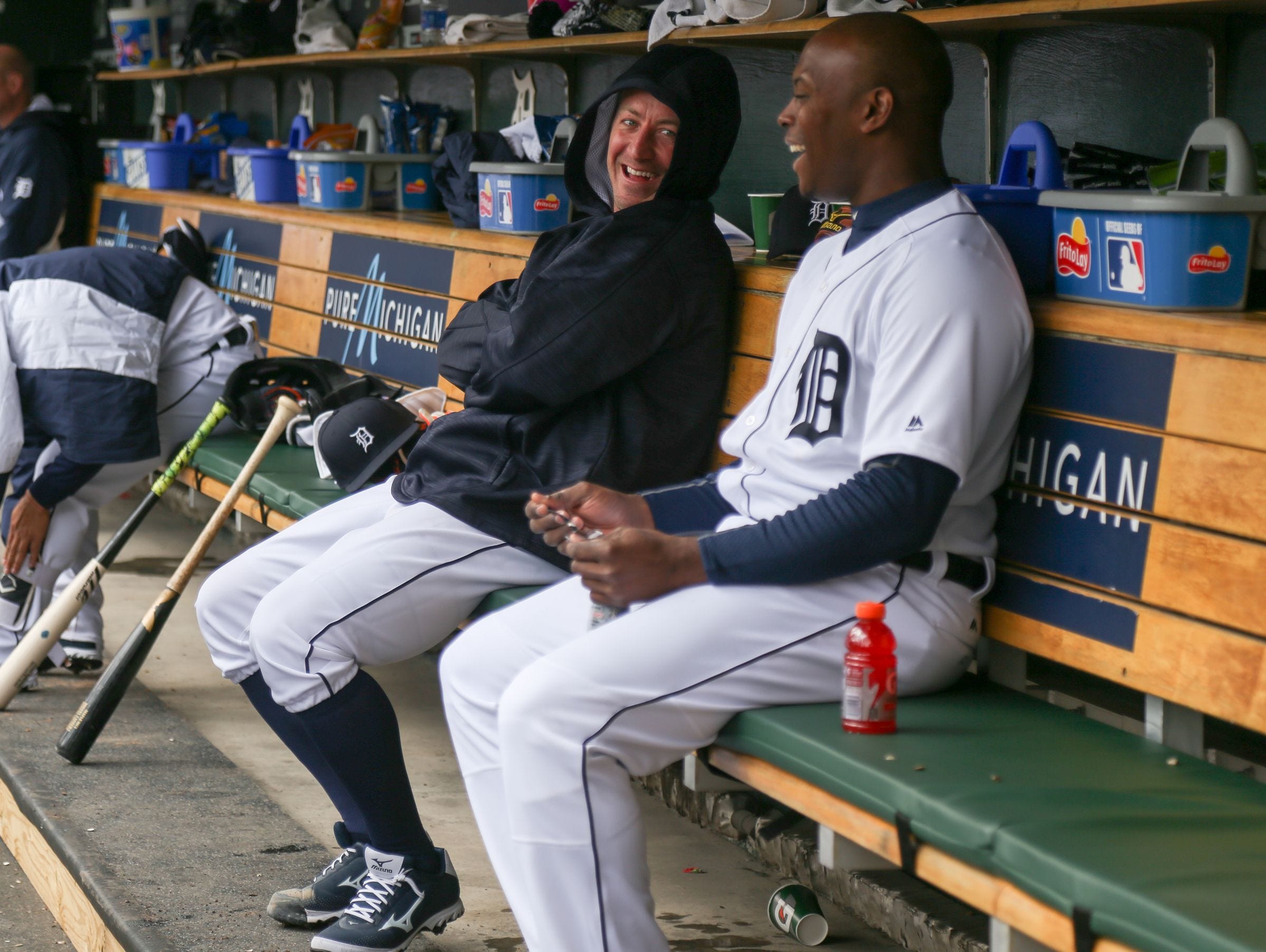 Detroit Tigers’ Jordan Zimmermann has a laugh with Justin Upton on the bench during the Opening Day game against the New York Yankees at Comerica Park in Detroit on Friday, April 8, 2016. (Photo: Kimberly P. Mitchell, DFP)

Finally, in the sixth inning of start No. 4 (against the Athletics), Zimmermann allowed a run, ending his scoreless streak at 25⅔ innings. Even that run was unearned; he allowed his first earned run of the season the next inning, though the Tigers were cruising at that point. Zimmermann wrapped up the month with seven innings of one-run ball against the Twins, and was named the AL Pitcher of the Month with a 0.55 ERA and a 1.060 WHIP in five starts.

Hit by injuries, he made just 14 more appearances the rest of the year, posting a 6.84 ERA in them and throwing just 9⅔ innings in the second half of the season, as the Tigers’ postseason chances imploded down the stretch.

The future: Why Casey Mize might benefit most from Zimmermann’s injury

Deep in the head of Texas

Zimmermann in 2017, much like the Tigers, wasn’t much better; multiple injuries struck, though he managed to make 29 starts. That wasn’t necessarily a good thing — he allowed 108 earned runs to lead the majors; his 160 innings ranked 60th. The injuries continued into 2018, as Zimmermann was limited to three starts in May and June combined.

July, though, was different. In his first start of the month, Zimmermann held the Blue Jays, in Toronto, to five hits and one run over seven innings. His next start, on July 6 against the Texas Rangers at Comerica Park, was the best of his career as a Tiger.

See also  At an altitude of more than 2,600 metres, it's all about football

Zimmermann gave up a solo shot to Shin-Soo Choo on his second pitch of the game — an inside fastball — then allowed just three more hits over his next 94 pitches and eight innings. He finished with 11 strikeouts, his most as a Tiger, thanks to staying away from the fastball and sticking with his breaking pitches.

“The slider is the best it’s been, maybe in my whole career,” Zimmermann told the Freep’s Anthony Fenech afterward. “It was really good. I rarely missed with it. The curveball was good, too. When the curve is good, it keeps the hitters off my slider.”

Those nights were rare following his domination of the Rangers. In his final 14 starts, he posted a 5.28 ERA and 1.427 ERA — better than his career stats with the Tigers, but not particularly good. 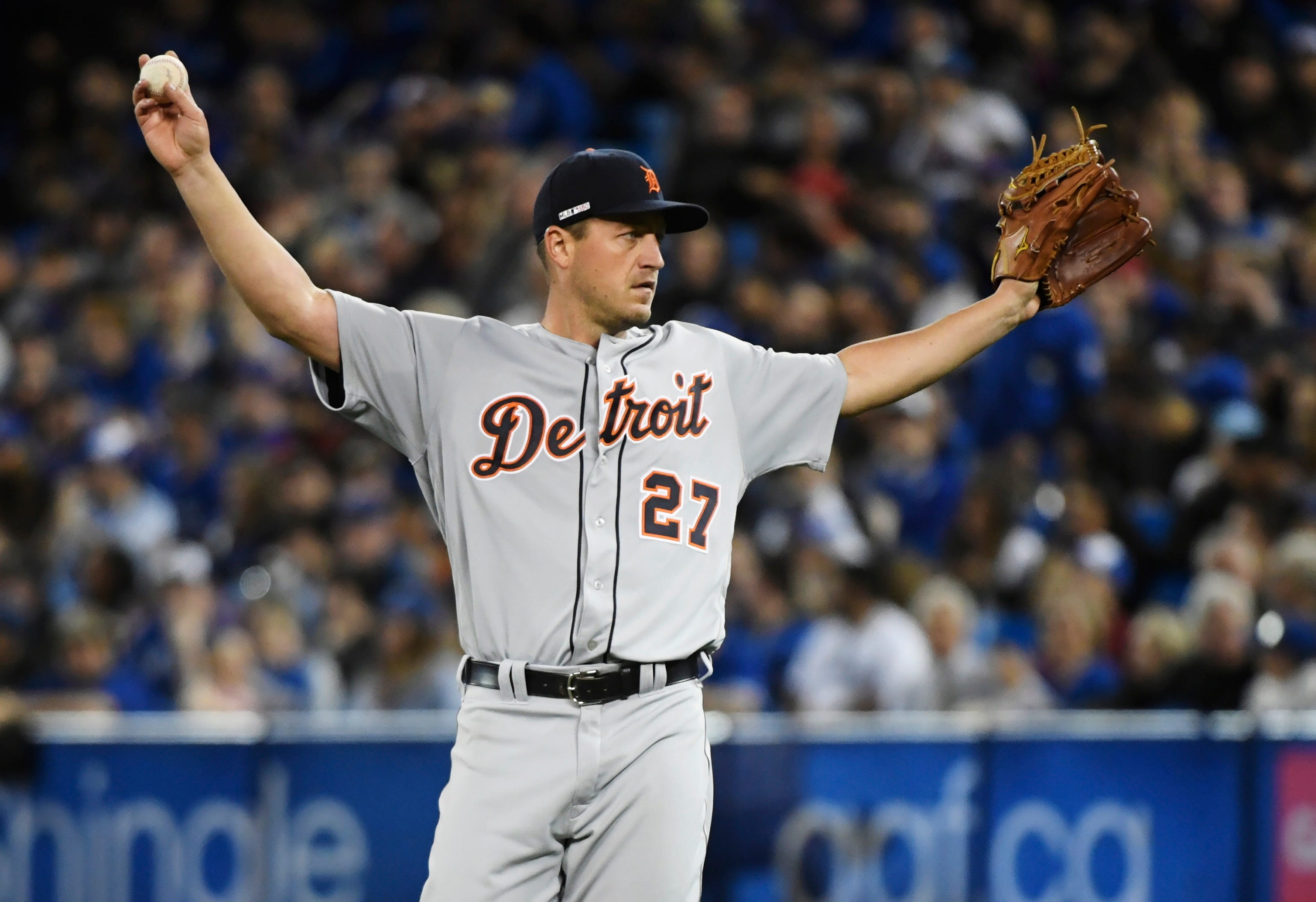 Still, heading into 2019, Zimmermann was the most experienced pitcher on the rebuilding Tigers’ staff, and he got the nod on Opening Day in Toronto.

It was a good call by manager Ron Gardenhire; Zimmermann retired the first 20 Blue Jays he faced before allowing a two-out single to Teoscar Hernandez in the seventh inning. He followed that hit with a strikeout and his day was done (though without a decision as the Tigers had nearly matched the Jays’ offensive futility).

Only two Jays worked a three-ball count, and Zimmermann made the most of his defense, with just four strikeouts, as he noted postgame with Fenech: “I had really, really good stuff today. I kept the ball on the ground and let the infield work and those guys did a great job.”

The Tigers finally scored in the 10th to get the win, giving Zimmermann at least one highlight for the 2019 season; he lost his first eight decisions and his final five to finish 1-13 with a 6.91 ERA. (The lone win came July 29 on the road against the Angels.)

See also  MLB Playoffs: What does the World Championship title mean in 2020? 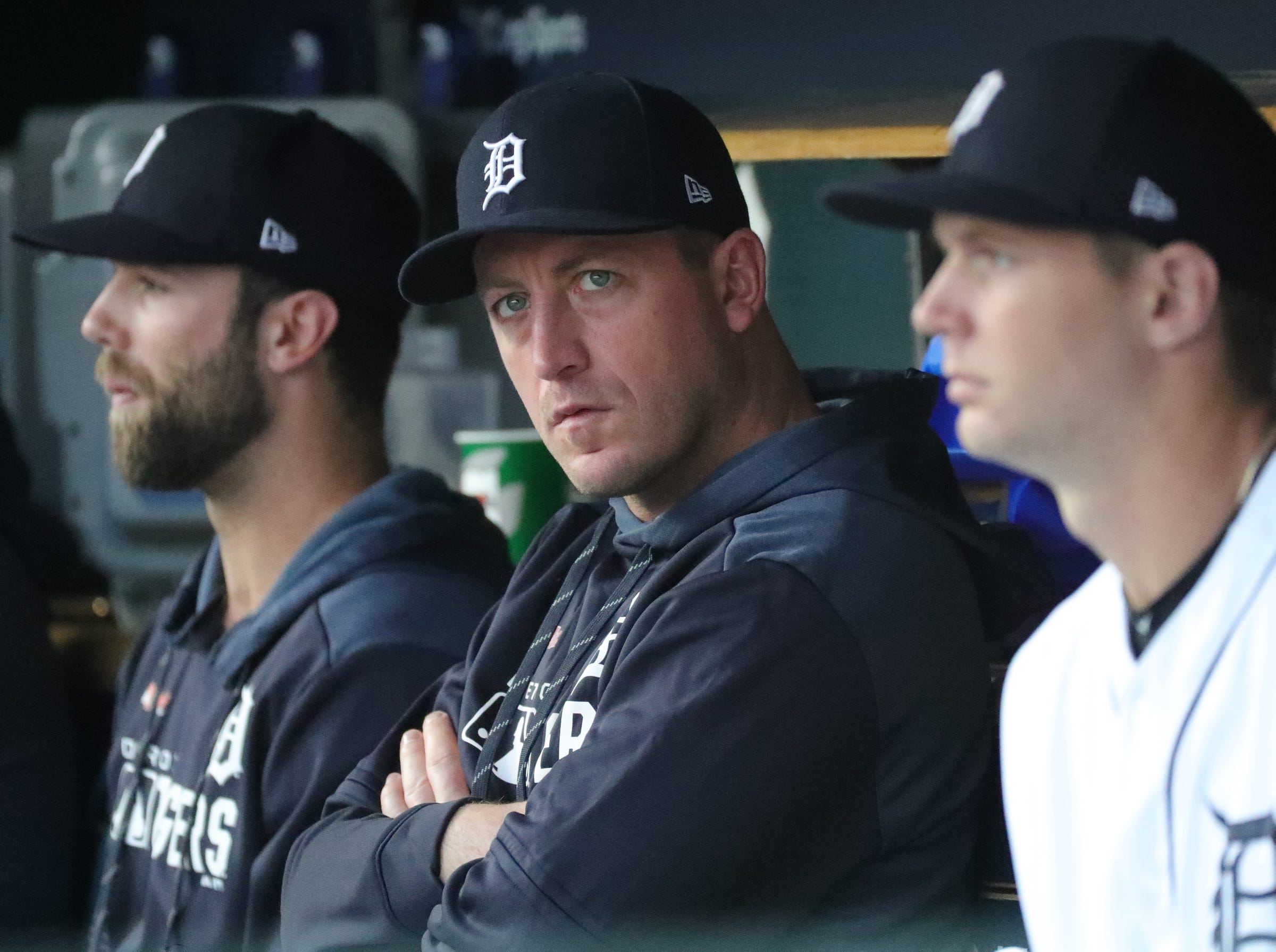 Zimmermann will close out his Tigers tenure with some history, though; no Tiger with at least 60 decisions has a worse winning percentage than his.379. Then again, with teammate Matthew Boyd right behind him at .408, this record might be better pinned on the Tigers’ bats, rather than Zimmermann’s arm.

The crystal ball: Predicting the Tigers’ record for 2020

One final bit of ignominy. Among those Tigers with at least 500 innings, three never threw a complete game: relievers Aurelio Lopez and Mike Henneman, and Zimmermann. Then again, Zimmermann’s not entirely to blame for that one, either; four of his 95 starts lasted eight innings, with the last coming in July 2018 against the Rangers.

In that epic performance, Zimmermann said, he was ready to go the distance, but he left the decision up to Gardenhire and pitching coach Rick Anderson.

From the pages of the Freep that week: “I just turned my back (to them) for a while,” Zimmermann said. “(Anderson) said, ‘Do you want to turn around and look at me, or not?’

“I looked at him and he had his hand out. I said, ‘You sure about this?’ He said, ‘Yeah.’ … They had already made the decision. I’m glad it worked out.”