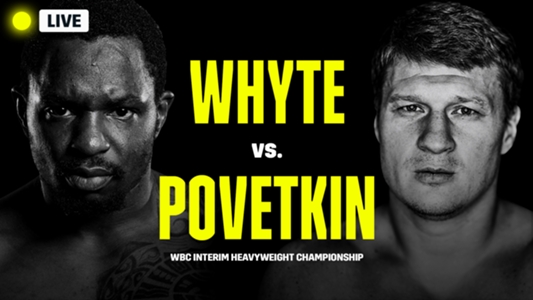 Alexander Povetkin stunned Dillian Whyte, and the world, with a vicious left uppercut out of nowhere 30 seconds into the fifth round of their battle for the interim WBC heavyweight title for the upset KO.

Povetkin (now 36-2-1, 25 KOs) had lost all four rounds prior to the finish, including a 10-7 in the third after Whyte (now 27-2, 18 KOs) caught him twice for a pair of knockdowns in what was otherwise a heavyweight clinic from ‘The Body Snatcher’.

The 41-year-old Russian appeared to be on borrowed time until one perfect power punch changed everything. Whyte hit the canvas hard, and the referee did not even go to the 10-count, immediately calling the finish.

“I watched his fights and took into account that he was open to uppercuts, both from the right and the left. It was probably the best finish of my career.”

“The negotiations to fight for the WBC title were only if Dillian retained the interim title, so we are going to invoke the rematch clause hopefully by the end of the year.”

In chief support, Katie Taylor and Delfine Persoon successfully recreated their classic encounter from June 1, 2019 – but this time, the unified lightweight champion earned a more convincing decision on the judge’s scorecards.

All three gave the thriller to Ireland’s Taylor, though one score at 98-93 earned shock and uproar from many onlookers while the other two, each at 96-94, reflected the fight that many witnessed a little more.

The card kicked off with a split draw between super middleweights Jack Cullen (18-2-1, 9 KOs) and Zak Chelli (7-1-1, 3 KOs), the first professional stalemate of both fighters’ professional careers.

Cullen, who moved up from middleweight for the bout, took one judge’s scorecard 96-95. Chelli, moving down from light-heavyweight, took the second card 97-93, and the deciding score came in at 95-95.

The belligerent Babic swarmed and pressured Chicago’s Winters, scoring a knockdown in round one before another in round two was enough to end it.

Kongo almost finished the champion off in round five before weathering a Clay rally to overwhelm his opponent once again before a knockdown off a hard left hook prompted Clay’s corner to throw in the towel.

The seventh victory inside the distance for Kongo moves him to 12-0, while Clay’s record now reads 13-2 (5 KOs).

Round 5: WOW! Povetkin rocks Whyte with a huge uppercut out of absolutely nowhere and he’s out cold! It’s over! Povetkin wins, and he was on the receiving end of a drubbing on the cards before that!

Round 4: Povetkin is caught coming in early in the fourth and the ref steps in to administer a count, so that’s a knockdown. Povetkin is growing increasingly wary trying to attack as Whyte is punishing him every time – and he adds another knockdown right at the death! This is a heavyweight clinic from Whyte so far. 10-7 Whyte, 40-34

Round 3: Whyte dips Povetkin’s legs with a nice shot in the opening minute. Povetkin is starting to land a few more of his own punches, but he’s also being picked off both high and low again. It looks like the Russian’s corner may think one particularly stiff body shot from Whyte was low. 10-9 Whyte, 30-27

Round 2: Whyte continues to pick his shots nicely and he’s alternating the lands between jabs to the face and solid body shots as Povetkin comes in. The challenger remains aggressive, however, and the Englishman will need to stay alert for a while to avoid hot water. 10-9 Whyte, 20-18

Round 1: It’s Povetkin who is looking to open doors first after a tentative feeling-out process, but Whyte soon warms up the jab to find skin more often than not, while many of the Russian’s shots are blocked. Slender advantage for Whyte to start off. 10-9 Whyte

11:00 p.m.: Big entrances for both challenger and champion. Four weeks of intriguing back-garden bouts climax with this big one. Introductions and final instructions are now in the books, and… here we go!

10:45 p.m.: All that remains is the main event. Dillian Whyte (27-1, 18 KOs) vs. Alexander Povetkin (35-2-1, 24 KOs), 12 rounds for the WBC interim world championship. The WBC are adamant that tonight’s winner WILL face Tyson Fury or Deontay Wilder, depending on whether or not that trilogy fight happens.

10:32 p.m.: Katie Taylor retains the titles via unanimous decision. There’s certainly an argument for two of the three scorecards at 96-94, but the third is 98-93 Taylor! What!?

10:30 p.m.: And a great rematch concludes with a Hollywood final two minutes. Absolutely dazzling open exchanges, but much like several rounds in the first fight, Taylor starts strong before spending the second half of the stanza taking far too much from Persoon. I’ve got it level at five rounds apiece. Now to see what the judges think this time…

10:25 p.m: Persoon is a MACHINE. Stalking, pressuring, landing. From two rounds down she earned another two in seven and eight for 4-4 with two rounds left, but Taylor just does enough catching the challenger coming in during round nine to edge back in front 5-4. Time for the final round!

10:15 p.m.: Round four is the roughest so far, littered with clinches and blocked shots. Taylor turns the style back on in the fifth, but once again after losing two rounds Persoon comes back and her work ethic leads to her outlanding the champ in the sixth. For me, it’s four rounds to two in Taylor’s favour after six.

10:05 p.m.: Three rounds in and Taylor looked inch-perfect in the first two, moving and striking exactly how she likes to and really swelling up the eye of Persoon early. Round three is the Belgian’s first good round so far and a necessary one to pull back on the cards as she strings together some good lands and begins to drag the champion into the trenches a little.

9:30 p.m.: Now, we await chief support. Katie Taylor vs Delfine Persoon, part two, for Taylor’s unified lightweight titles. Their first fight on June 1, 2019 was incredible. Will we finally get a conclusive finish?

9:25 p.m.: The towel goes in during the ninth round, and Kongo moves to 12-0 with his seventh win inside the distance. A class performance from the unbeaten Kongo, who had Clay in hot water in the fifth before again piling on the pressure in round nine. A left hook knockdown is all the corner needs to see and they bring it to a halt.

8:25 p.m.: Two rounds is all it takes for Babic to overwhelm Winters. Forty seconds remained in the second when the official waved it off after a knockdown. Babic also forced a count on Winters in the first. He’s 4 for 4 in both wins and stoppages.

7:15 p.m.: We’re about to get ring walks for the opener: Jack Cullen (18-2, 9 KOs) vs. Zak Chelli (7-1, 3 KOs), 10 rounds at super-middleweight. Cullen is stepping up to super-mid while Chelli is moving down after defeat last time out in the light-heavyweight ranks.

The Whyte vs. Povetkin card begins at 7 p.m. BST/2 p.m. ET, leading off with Jack Cullen vs. Zak Chelli. Whyte and Povetkin are expected to make their ring walks about 10 p.m. BST/5 p.m. ET, although the exact time depends on the length of the earlier fights.

The fight will be shown on Sky Sports Box Office in the U.K., and is available on DAZN in the U.S. and other DAZN regions.