After Covid-19 hit Peru, he walked hundreds of miles home 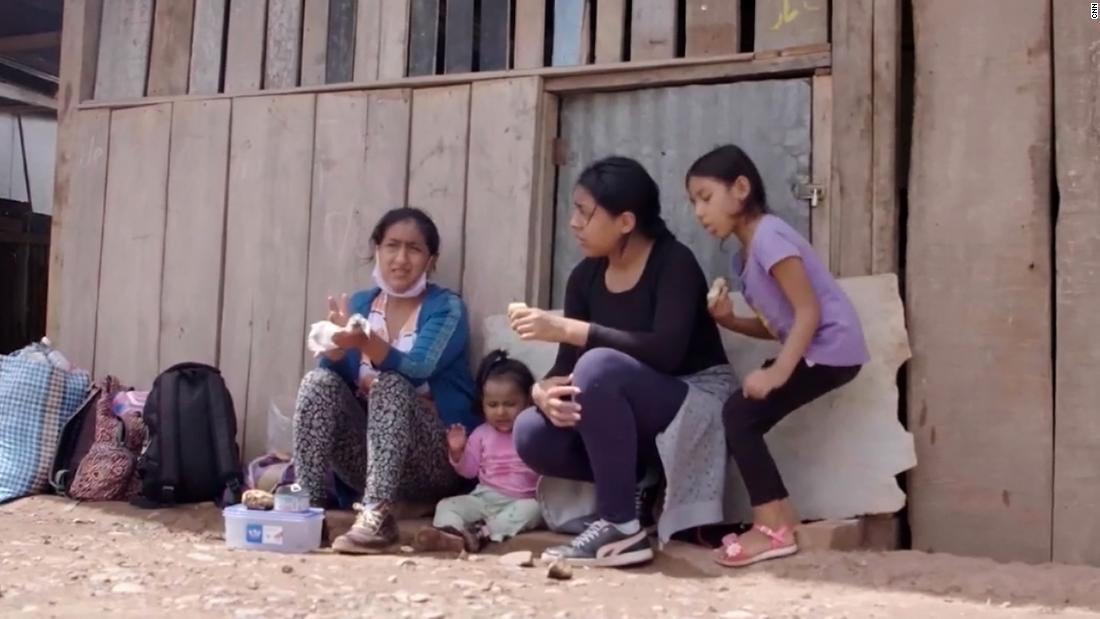 Tambo and her daughters first came to the Peruvian capital from a remote village in the Amazon rainforest so that her eldest, Amelie, could become the first family member to attend university.

The 17-year-old won a prestigious scholarship to study at the Universidad Científica del Sur in Lim, and the family had big dreams. They would rent a small room, help Amelie get started, and Maria would raise some money by working in a restaurant.

But when Covid-19 hit Peru, the nation stopped. More than 70 percent of people work in the informal economy, and as the country’s government began enforcing strict closures, Tambo watched employment opportunities disappear.

After almost two months of quarantine, they no longer have money left to pay for a rented room or food. Tambo decided to return to their village in the Ucayali region, 350 miles away.

With the exclusion of public transportation, the only option was to travel on foot. “I know the danger I pose to my children, but I have no choice,” she said. “Either I’m dying trying to get out of here or I’m starving to death in my room.”

Escape from the city

I met Tamba, 40, through a WhatsApp group where thousands of Peruvians talked about how they would leave Lima to return to their homes. “I haven’t left my house since the government declared quarantine,” she told me. “But I don’t have any more money.”

She agreed to let me follow her on a dangerous journey, to tell her story, unsure of what the outcome would be.

Tambo and her daughters left Lima in early May. She wore a face mask and carried the infant Melec on her back, along with a large colorful backpack sprinkled with small hearts. Amelie and seven-year-old Yacira ran past her, dragging their packages. A pink bear hung from Yacira’s backpack.

The family was not alone. Thousands of other Peruvians were on their way, desperately fleeing the pandemic and loss of revenue.

Their epic journey, dusty highways, railroads and dark country roads, would take Tambose through the high Andes before reaching the Amazon rainforest – a dangerous journey for a woman traveling alone with three children.

Walking in the heat, hour by hour, we watched them progress. Water and food were scarce, Tambo’s emotions were raw. She cried as she sang softly to her baby Melec. “No trail, make your way by walking,” she stammered.

There were moments of kindness and relief as they interrupted the journey, driving several times along the way. One driver tossed them food as he passed. But most of the time Tambo and her daughters walked.

On the third day, as they were fighting in the thin air near the Andes, at 15,000 feet above sea level, we saw a truck driver feel sorry for his family, driving them to the next town and sharing some of his food. “I walked so much,” she told the driver, trying to hold back tears of gratitude.

It was a short break for their feet. “My daughter’s hands turned purple,” she told him. “I thought it wouldn’t work.”

Checkpoints along the way

The trip home involved more than endurance. Tambo also had to navigate police checkpoints set up to prevent residents of Lima, the epicenter of the country’s coronavirus, from spreading the virus to rural areas.

Despite its strict locking rules, Peru is already one of the hardest hit countries in the world since the Covid-19 pandemic, with more than 230,000 diagnosed cases and more than 6,800 deaths to date, Experts believe the number could be even higher, and the hospital system has strained to fight the pandemic.

In San Ramon, just before Tambo entered the jungle, we watched as a police officer interrogated her. “You can’t go through here with the kids,” the clerk said. Tambo negotiated with him. “I’m just going back to my farm, in Chaparnaranja, where I’ve been working for a week.”

It was a lie. She could not tell the officer that she was coming from Lima or that he would not allow her to continue her journey.

But the exhausted mother persevered. She did what she had to do to survive, she told us. The virus was not as frightening as starvation.

After seven days and nights, and 300 miles, Tambo and her children arrived in their home province, the Ucayali region, where the indigenous people of Ashaninka also live.

The final obstacle stood in their way – entry into the territory was banned due to the virus.

“What would happen if an infected person came? How to escape?” one of the local leaders of Ashaninka told us. “The only respirator we have is air. Our health center has nothing against fighting the virus.”

But Tambo was determined. She negotiated with local leaders and was allowed to go home – provided she and the children were isolated for 14 days.

They arrived at night, Tambo was overwhelmed as the family dogs ran to greet them. She dropped to her knees and cried, thanking God for delivering her home as the animals wagged their tails and nodded to the child in their arms.

As tears flowed, her husband Cafet and her father-in-law came out of the darkness.

There was joy, but also distance. No one could touch it. No one can hug because of the virus.

“It was so hard, we suffered so much,” she told them through tears.

“I never want to go to Lim again. I thought I was going to die there with my girls.”