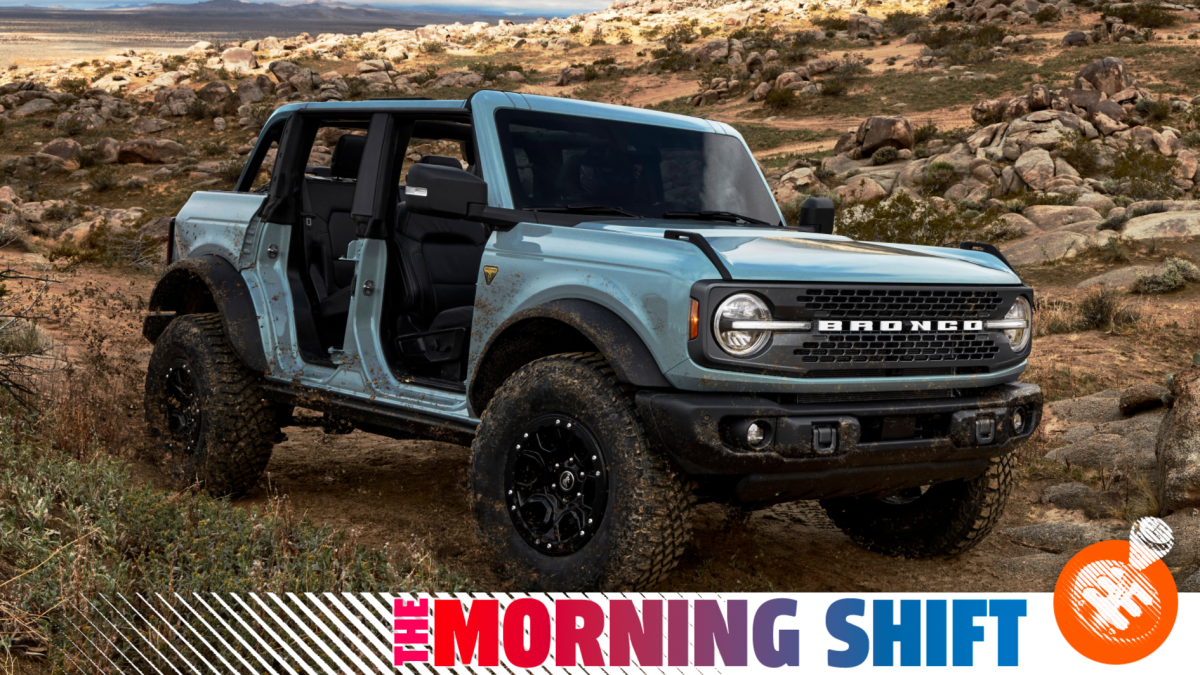 The Morning ShiftAll your daily car news in one convenient place. Isn’t your time more important?

Ford really thinks it might have a shot at taking down Wrangler, Jeep might have found a solution in Japan, and Renault has managed to build a car people kind of want. All that and more in The Morning Shift for July 20, 2020.

1st Gear: How Much Of A Shot Does The Ford Bronco Really Have Against Jeep?

Early takes on the new Bronco are ecstatic, and a lot of people think this thing is good enough—and different enough—to really take a bite out of Jeep Wrangler sales, but there are reasons to remain sort of skeptical. I mean, it’s obvious that the Bronco is probably a good car, and definitely has its own legion of fans but it’s impossible to discount how many Jeep loyalists there are.

Automotive News gave its own assessment of the situation over the weekend.

“From both a technical analysis and an emotional reaction perspective, this thing looks like it will have a very good shot at converting existing Jeep owners into Bronco buyers and will certainly convert non-Jeep general enthusiasts of off-roading,” automotive analyst Karl Brauer said in an interview. “But having a backlog of interested parties before the vehicle arrives at dealerships isn’t that tough to do. The winners are the ones that have a solid amount of demand six months, 12 months after the cars are available.”

G/O Media may get a commission

That is one potential problem, while the other is powertrain. Bronco did not debut with any hybrid setup, which isn’t a mistake as long as one is planned for the future, but more troubling was that it also didn’t debut with a V8.

One area without as much choice as some enthusiasts would like, however, is the powertrain. The Bronco comes with a 2.3-liter four-cylinder EcoBoost engine standard, or buyers can upgrade to a 2.7-liter V-6. A manual transmission is available only with the base engine. Some off-roading purists hoped Ford would have included a V-8.

“If you’re looking at a potential Achilles’ heel in the Bronco’s launch plan, that’s what it is,” Brauer said.

Jeep appears more than happy to exploit that weakness.

Hours before the Bronco made its debut, Jeep revealed a Wrangler concept powered by a Hemi V-8. In a not-so-subtle ad accompanying the reveal, the 450-hp concept tears through the countryside, the growl of its engine scaring off a herd of wild broncos.

My best guess is that Ford will sell an annualized 100,000 or so of these, though it will be interesting to see just how many. For context, Jeep sold 228,032 Wranglers last year in the U.S.

That’s according to data from the National Association of Minority Automobile Dealers, per Automotive News.

GM finished the year with 287 minority-owned dealerships, a gain of nine, while Fiat Chrysler Automobiles was No. 2, with 181, a gain of four. Toyota added seven to jump past Hyundai into the No. 4 spot, with 81.

Overall, minority dealership numbers continued an upward trajectory after taking a dive during the Great Recession. There were 1,243 at the end of 2019, 29 more than a year earlier but 31 percent less than the peak of 1,805 in 2005.

Ford Motor Co. had three fewer minority dealerships than a year earlier, remaining in third, with 165 stores. Hyundai had a net loss of seven minority-owned stores last year, dropping to fifth place, with 76.

Japanese consumers tend to prefer cash when buying new cars, but Automotive News reports that Jeep has been offering deferred payments and leasing amid the coronavirus pandemic. Jeep says it’s the first to do so, and that it has propped up sales.

But then COVID-19 hit, and Jeep sales in Japan began to tumble as customers dwindled.

In May, FCA Japan took a page from the American playbook, creating a plan called Skip Loan. It allows customers to skip up to five months of payments and pay next year instead.

“That kind of deferred payment is not uncommon in the U.S., a kind of buy now, pay later scheme,” [FCA Japan CEO Pontus] Häggström said. “But in Japan, nobody had ever done it before.”

The imported incentive ended up being a surprise hit. FCA Japan says it has picked up 2,000 contracts in the 10 weeks since offering the financing product. Vehicle financing, which accounted for around 40 percent of FCA Japan purchases last year, shot up to about 55 percent.

4th Gear: Renault Sales Are Down But Not For Zoe

It’s been fascinating to watch electric vehicle sales shoot up in Europe amid the coronavirus pandemic even as car sales in general nosedive. Renault is no exception.

French carmaker Renault (RENA.PA) on Monday reported a 34.9% drop in worldwide vehicle sales in the first half of the year due to the impact from the new coronavirus outbreak but said it had seen some signs of recovery in June.

Sales of its ZOE electric model were up by nearly 50%.

The uptick is likely in large part due to government incentives, but at the very least it is encouraging.

Joe Hinrichs allegedly retired from Ford in February, after serving as its top operations executive even though he is only 53. That was probably because of the botched launch of the sixth-generation Explorer. But, anyway, now he’s on the board of a startup. It is called Wavesense.

Hinrichs said the technology promises to be a “significantly lower cost solution” than lidar, which uses lasers to measure and locate features of the road around a car.

Reverse: To The Moon

Neutral: How Are You?

I made a steak last night with a pile of onions and a roasted beefsteak tomato. It was tasty. The Peugeot worked wonders.