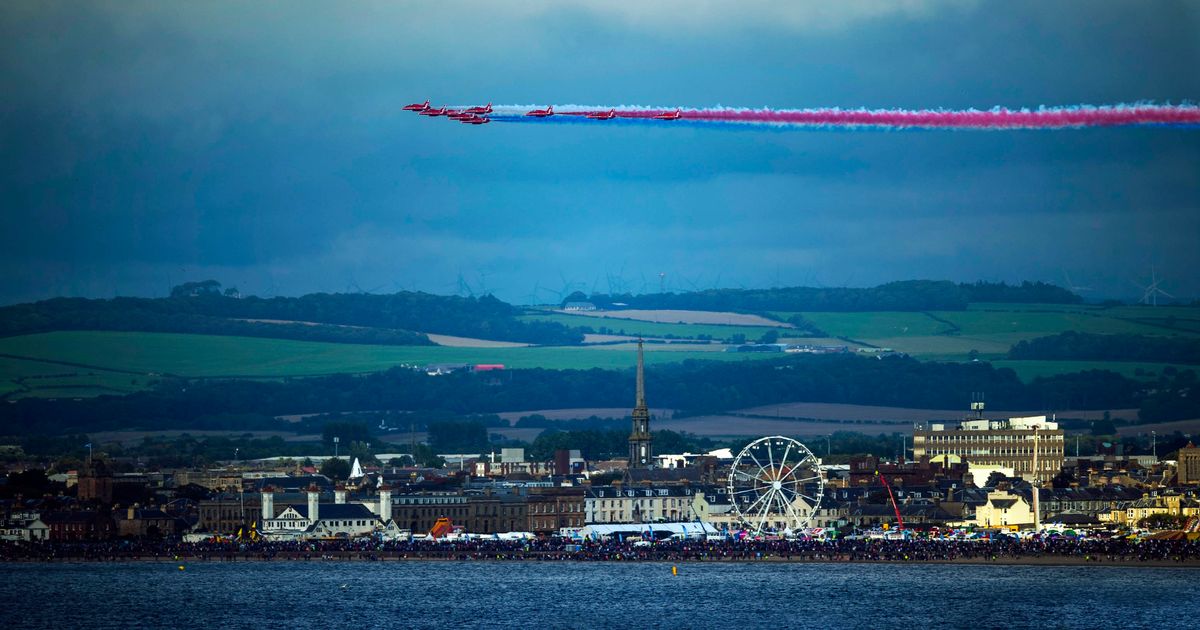 The iconic Red Arrows will soar over Scotland today to mark the 75th anniversary of VJ Day.

The UK-wide flypast is the first of its kind since the London 2012 Olympic and Paralympic Games.

The red planes are visiting all four capitals as part of celebrations marking the end of World War 2.

The RAF jets will fly over Berwick Upon Tweed at 11.16am before soaring over the sea near Eyemouth three minutes later.

Members of the public in the St Andrews area should turn their heads to the sky at 11.23am before the jets turn around and head to the sea near Longniddry at 11.28am.

The Red Arrows are set to appear in the skies over Edinburgh at 11.29am before travelling to Prestwick, Ayrshire, for refuelling.

The iconic group will then take off from the airport and head south over Dunure at 1.45pm.

They will fly over Ballantrae at 1.50pm, Cairnryan at 1.51pm and Portpatrick in Dumfries and Galloway at 1.52pm.

The Red Arrows while they fly across to Northern Ireland to continue their tour of the UK.

Japan ceased fighting with the Allied forces on August 15, 1945, three months after Nazi Germany did the same.

Plans to mark VJ Day were scuppered by the pandemic meaning the Red Arrows flypast is the main event taking place on Saturday.

Ahead of the occasion Prime Minister Boris Johnson said: “When the Second World War ended 75 years ago with the surrender of Japan, British soldiers, sailors and airmen were serving in the Far East, fighting hard to achieve victory – and were among the last to come home.

On this anniversary I want to remember what we owe the veterans of the Far East campaign.

“They brought an end to the Second World War, they changed the course of history for the better, liberated South East Asia, and many paid the ultimate sacrifice.

“That’s why on this remarkable anniversary – and every day hereafter – we will remember them.”