During Thursday’s KXIP and RCB IPL match, Virat Kohli had a bad day on the field, after which the spotlight fell on his wife, actress Anushka Sharma as well. Former Indian cricketer Sunil Javaskar Kohli slammed out the comment box and made a somewhat questionable note about the actress. His comment was not well received by fans of the actress.

Outraged by his comments while many invited Gavaskar for his comments, some were seen re-sharing an old post of Anushka Sharma where he criticized the offensive remarks against her. In the 2019 post, the actress released a statement criticizing comments about Indian selection committee members bringing cups of tea for her.

In her post she stated that she did not want her silence to be mistaken as her weakness and referred to instances where she has been blamed for the Indian national team’s performance. “I am not and will not be a pawn to be used by anyone’s ideas, beliefs, or agendas, and the next time you want to use my name to discredit someone, the board of directors, or even my husband, do it with facts and proof and leave me out. I lived my life, and built my career with the utmost dignity.” And I’m not going to concede that for anything. Maybe, it’s hard for some to believe. Because I’m a self-made, independent woman who just happens to be the wife of a cricketer … And to record, I drink coffee, “

Some have also shown their support for the actress by writing in the comments section. 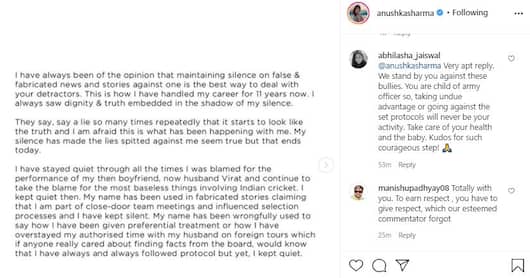 Likewise, looking for Kohli’s performance in the last match, Javaskar said during lockdown, that Virat was training with Anushka. Apparently, he was referring to the couple’s viral video that appeared during the country’s lockdown due to the Coronavirus. 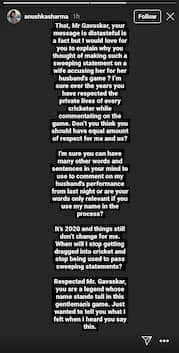 This, Mr. Javaskar, your letter is foul, the truth, but I would like to explain to you why you thought of making such a blanket statement about a wife accusing her of playing her husband’s game?

“I am sure that over the years you respected the private life of each cricketer while commenting on the game. Don’t you think you should command equal respect for me and us? I am sure you could use many other words and phrases in your mind to comment on my husband’s performance from Last night or are your words relevant only if you use my name in the process?

“It’s 2020 and things still don’t change for me. When will I stop being drawn into cricket and stop using me to pass sweeping phrases? Respected Mr. Javaskar, you are a legend whose names stand in this gentleman’s game. I just wanted to tell you how I felt when I heard you say this.” Anushka Sharma wrote in her Instagram story.

The report of the LaLiga match Atletico Madrid and Real Betis