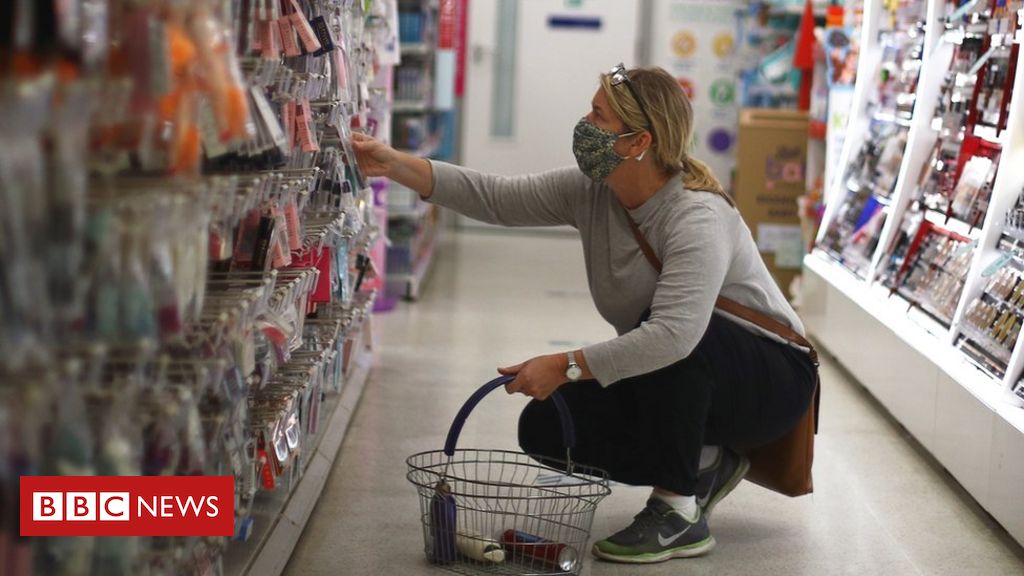 Full guidance on wearing face coverings in shops in England has been released, less than 12 hours before the new rules come into force.

They must also be worn when buying takeaway food and drink, although they can be removed in a seating area.

Those who break the rules could face a fine of up to £100.

And police will be able to “use force” to remove customers from shops if they do not wear face coverings, as well as prevent them from entering, guidance from the College of Policing says.

However, forces have said they will only be enforcing the rules, including issuing the £100 fines, as a last resort – and officers will not be patrolling premises.

There are exemptions to the new rules for children under 11, those with disabilities or certain health conditions, such as respiratory or cognitive impairments that make it difficult for them to wear a face covering.

Public Health England has warned parents not to buy coverings for babies and young children because of the risk of choking or suffocation.

We’ve been made aware that face coverings for babies and very young children are available for sale in England.

Children under the age of three should NOT wear face coverings, as they could cause choking or suffocation. pic.twitter.com/vmTMMdwioJ

It is not compulsory for shop workers to wear face coverings but the government said it “strongly” recommended that employers consider their use where appropriate.

The government said it was the responsibility of individuals to wear one, although businesses are encouraged to take steps to encourage customers to follow the law, such as with signs.

Sainsbury’s and Costa Coffee have already said their staff will not challenge or enforce customers who enter their stores. Asda said enforcement was the “responsibility of the relevant authorities”.

But Waitrose said it will have staff at the entrance reminding customers of the rule, while Greggs and McDonalds said takeaway customers need to wear masks.

Masks will not be mandatory in indoor venues which have other safety measures in place, including:

The government has been accused of mixed messaging over wearing masks in takeaways, with trade bodies and MPs saying there had been confusion about how the rules would apply.

A Department of Health spokesman said: “If you are in a premises where you are able to sit down and consume food or drink that you have bought, then you can remove your face covering in order to eat and drink on site.”

The criticism came after ministers and Boris Johnson’s official spokesman contradicted each other over how the rules would apply to takeaways and sandwich shops.

Speaking before the guidance was published, Kate Nicholls, chief executive of UK Hospitality, said the messaging from the government had been contradictory and it was “very late in the day” for the guidance to be confirmed.

Unison official Jon Richards also said the UK “was late to the table on face coverings and now people don’t know what they should do”.

He said the rules on face coverings were in place for shops and public transport but not for some other enclosed spaces such as libraries, register offices and civic centres. “The public needs clarity to end the muddle,” he said.

According to the government, face coverings should cover the mouth and nose and can be as simple as a scarf or bandana that securely fits around the side of the face without having to be held in place.

The requirement to wear face coverings at transport hubs – railway and bus stations, airports and maritime ports – only applies for those areas which are fully indoors and enclosed.

You are allowed to remove a face covering in certain situations, for example to prove identification in banks or when buying age restricted products.

Face coverings have been compulsory in shops in Scotland since 10 July. Shoppers are not currently required to wear them in Wales or Northern Ireland, although NI will wait until 20 August before deciding whether to make them compulsory.

Can police make me cover my face?

The Police Federation, which represents front-line officers, says they can’t spend their time patrolling thousands upon thousands of outlets.

Shop staff and security guards can already detain shoplifters while waiting for the police to arrive and police leaders hope shop managers will refuse non-mask wearers entry – rather than turning to the police to solve the problem.

Met Commissioner Dame Cressida Dick has said that police in London would only enforce the wearing of coverings in shops “as a last resort” – if people not wearing a covering refused to leave a shop or became “aggressive”.

Tracy Cannard, who works in a supermarket and is a representative of the shopworkers’ union USDAW, said while increasing numbers of customers were choosing to wear masks this still only amounted to around 20% and making it compulsory would help her feel safer.

James Lowman, chief executive of the Association of Convenience Stores, said he was advising its members to communicate the rules on face coverings through posters and informal conversations – rather than challenging customers who did not wear one.

He said incidents of verbal and physical abuse of shop workers had increased during lockdown and retailers did not want to risk creating a “flashpoint” for confrontation.

The head of the Trades Union Congress, Frances O’Grady, also warned the new rules could put staff at risk of abuse. “The new rules requiring shoppers to wear masks may further risk staff safety, she said.

“Shop staff are not required to police the wearing of face masks – employers must make this clear. And every employer must publish a risk assessment that sets out how they will safeguard staff from abusive customers and those who refuse to wear masks.”

Abuse could also be directed at disabled people who are exempt from the rule, a disability charity has warned.

Fazilet Hadi, a policy manager at Disability Rights UK, said there had already been “horrific stories” of disabled people being confronted about not wearing a mask, and has called for a government advertising campaign to raise awareness of the exemptions.

Health Secretary Matt Hancock said “everyone must play their part” by following the new guidance.

“As we move into the next stage of easing restrictions for the public, it is vital we continue to shop safely so that we can make the most of our fantastic retail industry this summer,” he said.

“I also want to thank the British public for all the sacrifices they are making to help keep this country safe.”

Do you have any questions about wearing masks?

In some cases your question will be published, displaying your name, age and location as you provide it, unless you state otherwise. Your contact details will never be published. Please ensure you have read the terms and conditions.

Use this form to ask your question:

If you are reading this page and can’t see the form you will need to visit the mobile version of the BBC website to submit your question or send them via email to [email protected]. Please include your name, age and location with any question you send in.

See also  The Digital Hanseatic League at the Service of Citizens